By Design By E - February 11, 2016
We love this "active and engaged" alternative symbol!  It's been adopted already in a few cities and under consideration all around the nation.  What do you think Virginia?  Check out the full article by Anne Quito on Quartz.

Since the 1990s, several designers have attempted to re-think the seated figure on the internationally recognizable symbol for disability access. Now, efforts to imbue the utilitarian signage motif with a political message appear to be gaining traction.

Connecticut governor Dannel P. Malloy is proposing that the state’s new handicap parking signs, license plates, stickers, and tags, starting in January 2017, use “a logo with a dynamic character leaning forward with a sense of movement.”

Malloy, whose bill comes in the wake of a citizen-led petition called “Change the Sign. Change the Attitude” and was filed for the February session of the state general assembly, wants to use a design that originates from a guerrilla street-art project in 2010.

Design activists of the Accessible Icon Project created the “active and engaged” alternative symbol, printed them on semi-transparent stickers and (illegally) patched them over street signs in Boston to draw attention to accessibility issues.

Their design has since gained wide attention and has been adopted by several US cities and private establishments. The new symbol has even been “acquired” by the Museum of Modern Art for its permanent collection.

If Malloy’s bill becomes law, the new design will replace the 47-year-old International Symbol of Access, first drawn by Danish graphic designer Susanne Koefoed to indicate spaces with “barrier-free access.” Koefoed’s original concept did not have a head and the circle was later added to humanize the figure. The updated version was adopted by the International Organization for Standardization (ISO), enshrined in the American Disabilities Act (ADA), and endorsed by the United Nations.
In 2014, New York became the first state in the US to adopt the more active access symbol, declaring the update a “major step to prohibit discrimination on the basis of a disability.” But the state mandate was later found to cause confusion since the ISO and the ADA still prescribe the original design, as the Observer reported. Businesses that displayed the new dynamic icon complied with New York state law but essentially were in violation of US federal regulation, which follows the ADA design standards.

Confusing, yes—but nothing like the era before standardization arrived in 1969. Before then, a variety of access symbols were used around the world, which caused a “messy situation,” explains Rehabilitation International, which led the initiative to find a clear and practical symbol.
accessibility accessibility symbol disability disability advocate rva rvanews the choice group 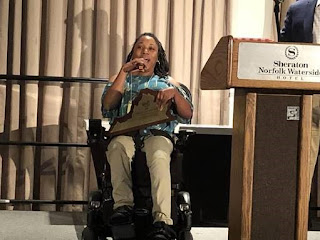