Showing posts from March, 2019
Show all

As soon as you walk into this grocery store you can’t miss Gina Loucks. She will be the first person to greet you and ask if she can help you. As a Courtesy Clerk, Gina is responsible for completing floor sweeps, collecting carts, bagging groceries, helping customers find products, and taking groceries out to customers’ cars. She has been working at her current employer since 2011 and loves what she does.  Ericka Neville, Vocational Counselor from The Choice Group, began working with Gina in 2010 to help her find a job that would be a good match for her skills and abilities. Gina is a people person and gets joy from helping others. Gina and Ericka worked to identify positions where she could interact with others, submitted applications, and practiced interviewing skills together. When Gina attended an interview with this grocery store, she knew right away that this was the job she wanted.  She was hired, began working in May 2011, and to this day continues to give 100% during ever
Post a Comment
Location: Richmond, VA, USA
Read more

When counselor Erin Lloyd began working with Shay Ruff, who interned with Blue Ridge Independent Living Center (BRILC) in Roanoke, Virginia back in 2007, she had no way of knowing that she would eventually become an employee.  Ten years later, in the spring of 2017, Shay was hired for a new position, as a Youth Transition Coordinator. She worked with her DARS Placement Counselor and, once hired, was introduced to Erin Lloyd, a Vocational Counselor with The Choice Group.  She and her employer communicated about the position and worked together to ensure accommodations were in place, so that Shay had a work environment in which she felt comfortable. She and her Vocational Counselor worked closely as she began learning her position and adjusted to working in an office setting four days each week. Shay set goals for herself, initially wanting to stay employed there three, and then six months. Almost two years later, Shay is still working with BRILC and speaks of her position with pr
Post a Comment
Location: Richmond, VA, USA
Read more 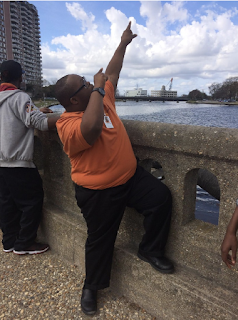 Rachel, vocational counselor serving the hampton roads area, began working with Stacey Whitter in the Summer of 2016. S tacey completed the Project SEARCH program and was able to try out different internships throughout the hospital in which he interned for. He did a great job in all 3 of his internships, but, really enjoyed working in Food Services/Patient Foods. Rachel and Stacey quickly realized that one of Stacey's strengths was his ability to connect with people and bring joy to any work environment. Looking at his skills and interests, they really wanted to find Stacey a job where he could be himself and work alongside others who share the same values. Rachel first started working with YNot Italian in the summer of 2016 to find a client, through The Choice Group, to work for them. That is when Stacey found and landed his current position there! YNot Italian has always been a big supporter of disability awareness, especially during the month of October which is National Dis
Post a Comment
Location: Richmond, VA, USA
Read more
More posts