Travis Behind the Scenes 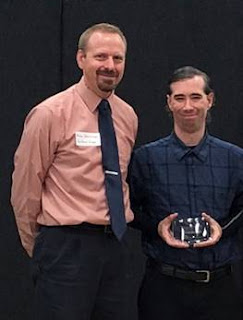 Travis began working with his vocational counselor, Nolan, in January 2019.  Travis was looking for a behind-the-scenes job, working away from customers, with predictable and repetitive job duties that suit his skills.  He has extreme anxiety and being around people he does not know is uncomfortable for him.  After about a month of exploring possible positions with Nolan’s support, Travis was employed in his current position as a part-time dishwasher at Arby’s.

It is a perfect fit!  Travis really thrives in his position because he is always early and doesn't miss a shift.  He also doesn't leave until the job is done and is very thorough.  Travis received the Champion of Professional Development 2019 Award at the Department for Aging & Rehabilitative Services (DARS) Champions of Disability Employment Awards Ceremony and is now able to complete his job duties independently.  Nolan continues to check with him and his managers at least monthly, and is available for additional support if needed.  Travis was able to get his driver's license, prior to this job, and enjoys the freedom and independence that comes with being able to drive allowing him to get to work early and be a valuable team member at Arby’s.  Travis states that with The Choice Group and Arby’s help he has conquered a lot of his anxiety issues and sees himself working at Arby’s for a long time.