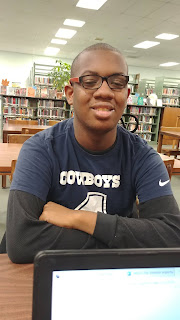 Christian's counselor, Ali, has been with him since the 2018 school year in order to help him gain employment. She says that not only has he been a model employee, but he is now a leader within Project SEARCH and encourages others as well.

Christian works at a grocery store as an attendant, but the interview process wasn't easy. Since Christian has a speech impediment, he required assistance but never gave up, practicing every day. Not only that, but he also helped his other classmates practice for their interviews as well. He got called back for three different interviews and landed the job!

Christian is excelling at the store now, and is currently working up the nerve to ask to be cross-trained. His favorite part is assisting the customers directly. He runs the Facebook support group for his classmates and is an advocate for the Project SEARCH program, talking to anyone who will listen about what a great thing it was for him.

Ali says, "When Chris began project search he barely spoke - he was polite and well mannered but struggled with advocating for himself. Throughout the year as Chris became more confident he not only began advocating for himself but began to advocate for the other students as well." Congratulations, Christian!