James Welds His Way Into The Workforce 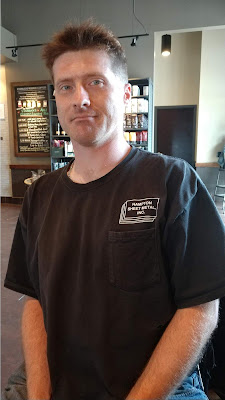 James and his Vocational Counselor, Nancy, began working together in June of 2016, when they began looking for his current position. James began working at Hampton Sheet Metal in January of 2017 where he was the first client hired that utilized Supported Employment services. He had a welding certificate but no welding work experience. Nancy and James worked with his DARS Counselor using OJT (On the Job Training) which is a program where DARS will pay for the client's first few months of pay while they are in training, as a way to advocate to employers to give him a chance. Employers will not hire people without welding experience so they used OJT as a way to advocate for James to get an employer to give him a chance. After many months of contacting several employers, Nancy was finally was able to get Hampton Sheet Metal to take a chance on James with the OJT program. He ended up doing very well and they kept him on. James has received several raises over the years and has recently received a $2 an hour raise. He initially was hired as a Helper, but in the last year was promoted to Sheet Metal Welder, after passing their customized welding test.
James is a hard worker and very dedicated and motivated to learn new things. He has an excellent work ethic and he strives for perfection. Although James struggles with internal stress and cognitive deficits, he has found great success in his current position. In the beginning, James had a limited work history and had to find a job on the bus line, which was an obstacle both Nany and James overcame with finding this employer. His managers say he has a great work ethic and has opportunities to continue growing there.
His daily tasks include shutting down the shop at closing, and also helping open the shop in the mornings. He does various jobs that include cleaning, helping others, welding, and finishing. James moved from LTESS/follow along into the Ticket to Work Partnership Plus program in May of 2017. Nancy continues to assist him in maintaining his employment and keeps monthly contact with him, while also occasionally checking in with his supervisors. James is a much happier, and a more positive person, since he has started working there and is now able to support himself. In his free time, he likes to ride mini motorcycles. James is also a painter and also enjoys playing online video games.
accessibility DARS inclusion job coach on the job training rva supported employment the choice group TTW vocational counselor
Location: Richmond, VA, USA