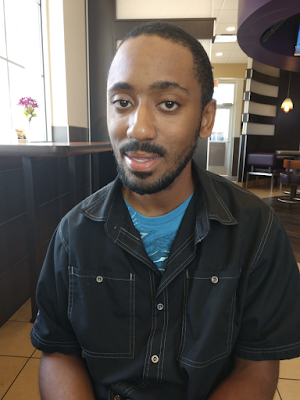 Nancy NcNamara began working with Derrick in 2016, the same year he landed the job in which he currently works. Three years ago, Derrick was looking to work in the food service industry in the kitchen. Together, he and Nancy found a job at Anna’s Ristorante: Pasta, Vino and Pizza. Not having prior work experience and living in Smithfield where there are limited restaurants, Derrick knew he would have to start out washing dishes, which he does not mind. Along with dishwashing he has also quickly moved up to food prep, fry cooking and sandwich/ sub making. Derrick is very easy-going and personable, everyone that meets him likes him. His coworkers love working with him and think he is a great asset to the restaurant. He is hardworking and dedicated to his job which has made it easy for him to take on more duties and responsibilities. Nancy visits him monthly to check on his progress and has noticed that he has become less shy and had opened up a lot since he started working at Anna’s. Along with taking on more responsibility, he has also gained speed in completing tasks. When Derrick is not working, he plays the organ and piano for his church every second Sunday of the month.
disability advocate disability at work disability inclusion job coach rva supported employment the choice group vocational counselor
Location: Richmond, VA, USA