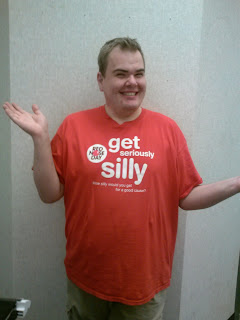 Kristopher Morris has been working in Charlottesville at a well-known pharmacy & convenience store for almost 6 years!  Rosemary, a Choice Group vocational counselor, has been working with him since December of 2010 (when he got the job!) and notes a big difference between back then, and now.

When they first started working together, Kristopher had misgivings about joining the workforce.  Customer interaction gave him anxiety due to a hearing impairment.  He didn’t want to answer phones and definitely didn’t want to drive to work.  However, he told Rosemary that he was interested in photography so they both decided that a photo lab was a natural place to start.  Rosemary found a position open at the national drugstore chain in their photo lab, and it was close to Kristopher’s house so he didn’t have to drive!  She helped him apply and interview and he got the job that same month!

He began working running the photo lab and troubleshooting photo lab machine problems.  He eventually began answering phones and stocking, then assisting customers at the photo kiosk and running the front register!  He even earned the title of Head of Photo Specialist (until this position was removed from all stores).  Kristopher grew in confidence through working, earning Employee of the Month NUMEROUS times according to Rosemary, and earning the title of Top Suggestive Seller quite frequently as well!

With all of his savings, Kristopher was able to buy himself a black Jeep that is now his love. “This is special,” says Rosemary, “because when we first started he was too nervous to drive to work!”  She notes Kristopher’s compassionate, kind and helpful nature among his other great qualities. “If he knows someone is having a hard day, he’ll go out of his way to listen and help them feel better, even if he’s having a hard day himself."

Kristopher is currently in the process of writing his second novel, which we can all hope is full of his great sense of humor and in his spare time, hangs with his dog, a boxer named Ringo.  He loves his job and hopes to be a Store Lead, or even Store Manager one day!
charlottesville disability disabilityemployment rva rvanews supported employment the choice group vocational counselor
Location: Charlottesville, VA, USA