Nancy says, "[Meredith] loves her job and enjoys making her own money. Meredith loves to stay busy." In fact, she excels at her job, earning Employee of the Month in January 2015 and she received a gift card as a reward. Nancy also notices improvement, stating, "Meredith has improved with staying focused on her job duties. It has made [her] a more confidence and independent person." 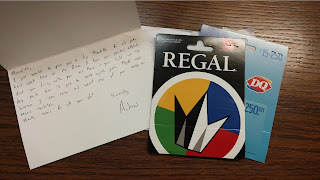 In her free time, Meredith participates in the Special Olympics, playing goalie and captain in soccer, co-captain and shooting guard in basketball, and plays partners and singles in tennis. She has won gold medals! She also assists teachers at a local preschool and babysits her two nephews. Way to go, Meredith!