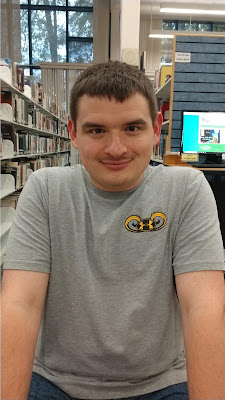 Jorden and Nancy began working together at the end of October 2017.  Jorden lives in Capron and the nearest town with employers is Franklin.  As part of the vocational services process, Nancy arranged an opportunity for Jorden to explore what a Courtesy Clerk does, and Jorden really enjoyed the experience.  The primary purpose of this experience was to give Jorden the opportunity to “try on” a position to determine if the job duties were those he liked and would be capable of doing.  In the process, however, it demonstrated to the manager firsthand how capable he is at doing all required job duties, which worked out well!  The manager of the Farm Fresh in Franklin was impressed.  Although Jorden is personable, he may have had difficulty conveying his abilities in a standard interview.  In this situation, the Manager spoke with Nancy and Jorden after the assessment about open positions, and offered Jorden a job.


Unfortunately, the Farm Fresh in Franklin closed, and Jorden was forced to look for new employment.  With Nancy’s support, they were able to locate a similar Courtesy Clerk position at Roses in Franklin before his last day at Farm Fresh.  Jorden left Farm Fresh in mid-May 2018 and went straight to work at Roses in Franklin from there! He is hard working, always on time, and detailed and task oriented. He is dependable and it is clear to his coworkers and supervisors that he enjoys his job. His current Manager, Tammy, stated that "Jorden is a joy to work with."


His job duties include collecting carts, dusting and mopping the store, trash removal, cleaning windows, watering plants, cleaning the restrooms, restocking merchandise, unloading the truck, and assisting customers as needed.  Jorden was honored with a monetary award by the District and General Manager at Roses in Franklin for his hard work and dedication. He has also received a raise this past summer. Recently, in addition to being a Courtesy Clerk, he helps unload the truck on Thursdays.


Nancy continues to support Jorden by maintaining good communication with him, his mom and managers. Nancy has noticed that Jorden has become more personable and states that he feels like a more fulfilled person contributing to society. Jorden is also a lot more interested in learning and trying new things. For example, he asked his mom to learn how to do things at home, such as the laundry and ironing so he can get his uniform ready for work on his own. He also makes his own lunch and snacks for work. He uses checklists at home that he created to help him learn these things. This is a transferable skill he learned from using a task list at work to learn his job. He no longer needs a task list at work to complete his job duties.


In his free time,  Jorden participates in bowling and swimming yearly in the Special Olympics. He participates in the Hope and Happiness program quarterly where he attends social activities like dancing and ballgames. He enjoys watching NASCAR and the Discovery channel. He loves to draw and paint NASCAR race cars and characters from TV shows, such as Total Drama characters on the Cartoon Network.
disability at work inclusion rva supported employment vocational counselor
Location: Richmond, VA, USA