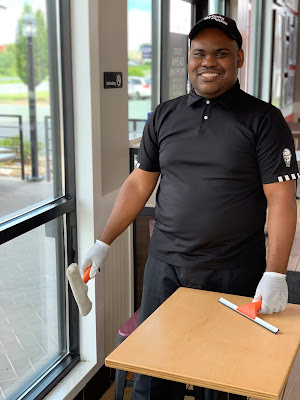 Joshua and his vocational counselor, Justin, began working together in April of this year. Together they found an available position at a local KFC restaurant where Joshua has been employed for the last six months.

In the beginning, Joshua and Justin completed several assessments to determine Josh's interests and the positions that would be the best fit.  This was followed by interviews and finally a job offer. Although having to overcome difficulties with social skills, including being comfortable speaking with others, Joshua’s social skills have improved greatly. Justin helped Joshua work on new ways to approach and greet guests, as well as helping him to remember his daily job duties, which have also significantly improved since first starting employment at KFC.

Joshua has a strong drive to learn new things which has really helped him in his job. He has a very positive attitude and is always excited to come to work. Some of his job duties include washing the dishes, as well as the windows, and he really enjoys doing them both. His two favorite parts of the job are using the squeegee to clean the windows, as well as the three-compartment sink to clean the dishes.

Joshua has achieved so much since beginning employment at KFC and has become much more comfortable in speaking with others. He is able to complete his task list multiple times during a shift and communicate with his supportive associates if there is a problem. When Joshua first began he was very nervous about passing out free desserts to customers in the restaurant, but has since grown and come to enjoy this task.

Justin continues to support Joshua on the job by demonstrating work site activities, such as engaging with others to do tasks such as passing out free desserts. Justin also provides him with positive feedback and encourages him to do his best.

His managers and associates at the restaurant love working with Joshua because he has such a positive attitude and great personality. Joshua receives frequent recognition on his great work ethic and is often praised for his great work and growth.

In his free time, Joshua loves to workout at the gym and go on nature walks. He is always giving his parents and counselor advice on choosing better options when it comes to food because he really enjoys health and fitness.
disability advocate disability at work disability inclusion job coach rva supported employment the choice group vocational counselor
Location: Richmond, VA, USA