Joseph (Karate) Chops his Way Into a Career 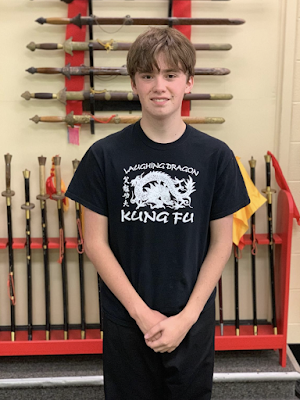 Joseph began working with his vocational counselor, Justin, beginning in June 2019. Together, they found Joseph an internship at Laughing Dragon Kung-Fu, a local martial arts studio, where he has been for 2 months now. While Justin was there to guide Joseph into finding employment, Joseph was the one who initially thought of pursing a position at the studio. After speaking with the manager of the studio, they got the green light for Joseph to start the internship! The manager informed them that everyone at the studio thought it was a great opportunity for Joseph to excel and use his skills to teach others.


In the beginning, Joseph had to work on his social skills when teaching the children at the studio, but has shown great improvement. Since beginning the internship at the studio Joseph's patience has increased tremendously and his motivation to work and help others has improved greatly as well. Joseph's determination to do well is one of his strengths that has allowed him to put his best foot first, regardless of his disability. He once told his vocational counselor and mother that he "is just as normal as anyone else and will show everyone just what he can do." His patience became a big strength for him, although at first it was hard to understand how to approach and or talk with younger children. With the support Joseph has received from Justin and others he was able to understand and learn how to address the children and it has proven to be a great fit.


Joseph's daily tasks at the studio include cleaning the Dojo before class, along with the bathrooms, as well as vacuuming, dusting and sweeping. He also teaches two different classes, both classes being for kids younger than he is, 13 years and under.


Although Joseph had to work on his patience at first, he has grown tremendously in his teaching skills. Justin continues to support Joseph by encouraging him to keep improving, and to remember to teach the children rather than just tell them what to do, a skill he has learned in this position. Rather than being quick to anger when he is not understood, Joseph has learned to take things slowly and repeat himself without getting upset. When Joseph is not working at the studio he enjoys playing video games and reading. Keep up the great work Joseph, and thank you Justin for submitting this client success story!