Friendship at the shipyard: Robert and Tyzeek's story 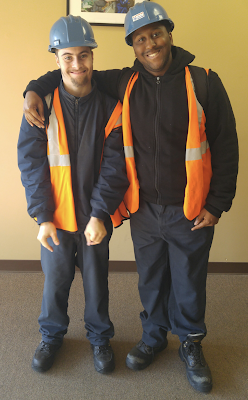 Robert and Tyzeek, friends and coworkers!

Rachel McGregor began working with Tyzeek Gadson beginning in the summer of 2015 and Robert Sanchez the summer of 2011. Tyzeek has currently been employed loading navy ships with supplies going on 2 years and Robert for 5 years. Both clients began their employment search with an interest in materials management and completed internships in materials management while in Project SEARCH. Both Tyzeek and Robert excel in different aspects of their jobs because their strengths differ. Tyzeek is very strong physically and is able to lift a lot of heavy material, whereas Robert has good attention to detail and his visual and auditory skills help him to understand the process of loading the ships efficiently. Although, both young men work together to get the job done and support each other every step of the way.

Both Tyzeek and Robert overcame obstacles during their time at Project SEARCH that helped them find their place in the workforce. Both clients worked on social skills as well as learning and understanding different methods of transportation around the community. Tyzeek and Robert have become close working together and now even carpool to and from work!

Tyzeek and Robert both have excelled in their positions and learned so much from working in this field. Robert has received his 5 year certificate which is a great accomplishment for him. Tyzeek has excelled by becoming more independent at work and home. Both have learned to manage a variable schedule using a hotline to call in every night. Overall both Tyzeek and Robert have made great strides since starting work at the naval shipyard. When Robert started at Project SEARCH in 2011, he was very shy and reserved and had not know how to show initiative. Since completing Project SEARCH and working for 5 years on the navy base, Robert has been showing great communication skills and his manager has said that he demonstrates strong leadership skills when working with his coworkers. Robert is well respected by his coworkers and is considered a leader smong his team members. Since starting with Project SEARCH is 2015, Tyzeek has learned to stay focused during conversations, take initiative when learning new tasks, and is more aware of his surroundings. Tyzeek is very welcoming and really enjoys helping new employees become familiar with the unusual work environment.

While Robert and Tyzeek met working together on the navy base they quickly became good friends and share many of the same interests. Both Robert and Tyzeek participate in the Special Olympics bowling league where they enjoy Friday nights hanging out with friends. They both love football, though Tyzeek is a Redskins fan and Robert is a Viking fan. They both have extremely supportive families who have forged a friendship and now take turns managing the varied schedule by taking the young men to and from work. Working together and finding employment through The Choice Group has created a lifelong friendship for these young men and has helped them overcome many obstacles.
accessibility disability disability at work disability inclusion friendship job placement project search rva supported employment the choice group ticket to work vocational counselor
Location: Richmond, VA, USA