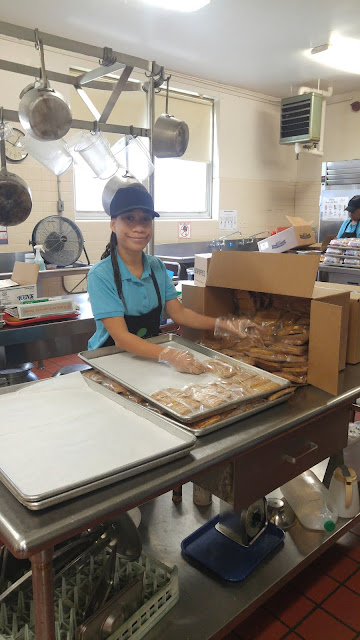 Vocational Counselor Rachel McGregor began working with Chanell Teasley in the Summer of 2017. Beginning in September of 2018, Rachel helped her find work at a local elementary school. "Chanell has always had an interest in food services as well as in childcare. We decided to look at a position within the schools where she could blend both interests” McGregor said. Chanell is very friendly and loves people. She uses her fun personality to interact with the students and also has great attention to detail and is able to learn tasks quickly. Chanell has grown with her independence and confidence as she has been working at the school. Her tasks include but are not limited to prepping the food, serving the students, cleaning the kitchen and washing the dishes as needed. Before finding the job at the local elementary school, Chanell worked on improving her stamina while participating in Project SEARCH. She was able to build up to be able to work for several hours on her feet. Chanell also focused on her interviewing skills after she graduated from Project SEARCH. She attended a few other interviews where she was able to practice her skills and work on how to answer the tougher questions. Initially, Chanell was very nervous about starting a job in a new environment she was not familiar with. She quickly adjusted with the support of her co-workers who have embraced her as part of the team. Chanell loves her work and has grown to be a hard worker who works as part of the team.
Rachel checks in with her and her manager as needed but Chanell is very independent on the job and is doing great! In her free time Chanell loves to dance and make people laugh. She also enjoys going bowling on the weekends with her friends and spending time with her family and friends.
accessibility clients disability at work disability inclusion rva success story supported employment thechoicegroup ticket to work working with disability
Location: Richmond, VA, USA