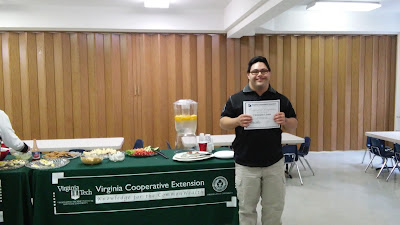 Heather Gilman, a Choice Group counselor serving Central Virginia started working with her client, Christopher in July of 2017.  Together they made lists of Christopher’s job preferences such as cleaning and stocking, and she was able to set up vocational assessments to try out those skills in action. While he performed well, they did not seem to be the best job fit.  As Heather got to know Christopher and his family, discussing his hobbies and interests, his family told her that he enjoys cooking loves helping out in the kitchen. Bingo! They immediately began looking for opportunities in local restaurants to complete another assessment.

It was during this time that Heather came across a flyer for the Stone Soup Project. Stone Soup is a food service training program designed to help those who complete the course get necessary job skills to enter the workforce. After talking about the opportunity with Christopher, she advocated to support him in this program to his DARS Counselor.  The 6-week course began in October. They attended the classes together and Christopher not only learned important food prep skills but received many items he could take home in order to practice what he learned in class.

Since Christopher had such an affinity for working in the kitchen and around food, he did well to learn new tasks.  He enjoyed his homework and practicing techniques he learned in each of his classes which helped with his skill acquisition.  During the course, their largest one yet, Heather assisted Christopher to position himself in key spots in the classroom so that he could see the skills being modeled and ensured he had a chance to try out the skills being taught.  Christopher also developed some natural supports with other class participants who wanted to see him be successful.  Christopher continued to learn more skills each week. He would remember what we had done the week before and was able to increase his independence with assigned tasks. His knife skills greatly improved over the course of the program.

During his time at the Stone Soup Project, Christopher received three certificates for completing the class: ServSafe, Customer Services: In Action, and Stone Soup Food Prep Job Skills. Heather and Christopher will begin JD in January and are positive that all of the skills and certificates he has earned will make his job search with local restaurants successful.

Christopher loves to cook and listen to all types of music.  He is an extremely friendly and personable guy. When you speak with Christopher, you can’t help but smile.
charlottesville disability hampton roads NOVA rva supported employment the choice group vocational counseling vocational training
Location: Richmond, VA, USA