Congrats Patrick Dunbar on Your Success

By Design By E - April 12, 2016
A great story from one of our counselors, David, about a most recent success working with a talented individual such as Patrick Dunbar. 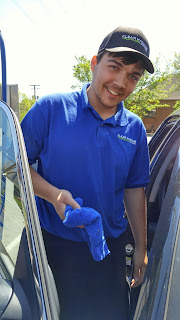 Patrick Dunbar is currently working for the Clean Machine in Charlottesville where he washes, dries, vacuums, and details all types  of vehicles.  I started supporting Patrick on January 21st.  Patrick was  diagnosed with ADHD, and he had an extremely limited work history.   In a way, the Clean Machine is his first official job.  When reaching out  to other employers, some of the challenges that Patrick faced were not  having a driver’s license, living an hour away from where he wanted to  work which was Charlottesville, lack of work experience and limited  education.  It was my job to  assist Patrick with obtaining his driver’s license, finding a job, and  moving into his own place closer to town.  Shortly after working with  Patrick, I supported him with getting his driver’s license.  This was a  most joyous occasion for him.  Patrick wanted to work outside, around  cars, and with his hands.  With these interests in mind, I spoke to the  GM at the Clean Machine who ended up interviewing him and hiring him  on the spot.  The last piece of the puzzle will be to help him find his  own place.  Patrick is currently saving money from his new job so that  this goal can come to fruition very soon.

The myriad of strengths that Patrick possesses contributed immensely  to his success.  He is a clean cut individual with a calming effect on  people around him.  Patrick loves animals and has a dog named Poopsy  that is the world to him.  He said he will not move if his dog cannot  come with him.  Patrick has an innate drive to succeed.  He follows  through on all of his commitments, works quickly and efficiently, never  complains, and feels that no task is beneath him.  He is a very honest  and kind young man who has a pep in his step.  Patrick said that he owes  it all to his late grandfather who taught him from a young age to give it  his all no matter what he did.  His grandfather also taught him how to  work on cars and live off of the land.

April 15th will mark one month that he has been at the Clean Machine.   The General Manager, supervisors, and co-workers are all impressed  with how quickly he learned the job and the level of excellence that he  delivers every second of the day.  The General Manager commented,  “Patrick is awesome!  I feel like he is an old soul.”  Being successful at  this job has given Patrick more confidence and a beaming sense of  accomplishment.  He realizes that there is nothing he cannot achieve if  he works hard and puts his mind to it.  It has been my privilege and pleasure to work with such an incredible talent.  Patrick Dunbar is one of a kind!


Vocational Counselor with the Choice Group. 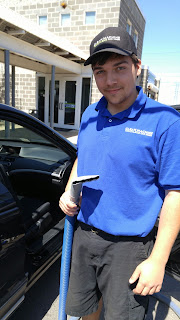