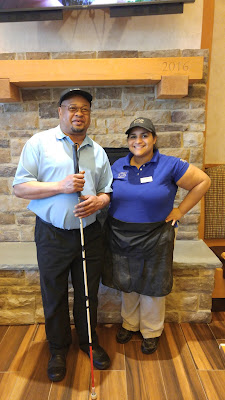 In the first few minutes of meeting Jeff, you quickly learn that he is a hardworking man. Over a year ago, he contacted his DBVI (Department for the Blind and Vision Impaired) Counselor and requested help in finding a job. He had recently left his job as a Manufacturer at a local business in Charlottesville and wanted a job as a Dishwasher. That’s when he met Kate Gariepy, a Vocational Counselor with The Choice Group. Together, Jeff and Kate completed several assessments in his community before beginning to look for a job.

After several months of applying for jobs, Jeff was hired at a new local restaurant as their daytime Dishwasher. Jeff quickly learned his job and became friends with the owner and several of his coworkers. He was highlighted on the restaurant’s Facebook page that eventually caught the attention of a local news station. Jeff says that since his appearance on Newsplex CBS19, many of his friends contacted him to comment on the news story. Jeff continued to work at the restaurant for the next 12 months before contacting his DBVI Counselor again for help.

This time, Jeff immediately requested to work with Kate Gariepy from The Choice Group. He called her the next day and explained that his hours were reduced at the restaurant and he was interested in finding a part-time job near his home. He told her that he wanted to work in the evenings and be able to walk to and from work. Once again, Jeff submitted applications to various businesses and was shocked when he was scheduled for seven interviews within a week. Jeff was offered a job at another local restaurant which he learned was a 5-minute walk from his home. Jeff accepted the position and started working at the end of September. While working with Kate, Jeff also interviewed at Wegmans and was hopeful to be offered a position. A month later, Jeff accepted an offer for part-time employment at Wegmans as a Dishwasher.

Currently, Jeff works three part-time jobs. He lives with his roommate and spends his free time hanging out with friends and going to Dave Matthews Band concerts. Although he is Visually Impaired, he does not let his disability affect his work. He says that he is grateful for The Choice Group and the help he has gotten over the past year from Kate. 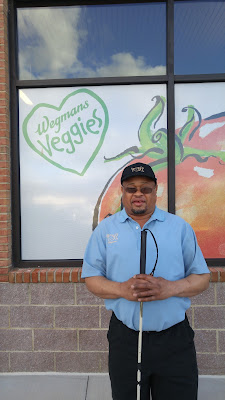